Characterization of Stepper Motors and their comparison

We know that on the application of DC voltage, brushed DC motors can rotate 360 degrees continuously. But, what if we aim to position the engine at a particular angle during the rotation?

Suppose we need to focus our digital cameras to zoom in and zoom out automatically. There we will use Stepper motors. These are brushless, synchronous DC motors where the entire rotation is divided into the expansive number of steps. Another good thing about the engine is that they can be controlled digitally as an open loop system, i.e., no feedback loop is required for its accurate operation. 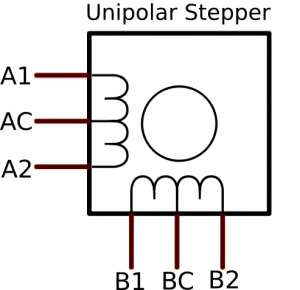 The center tap of the Unipolar motor remains connected to either a voltage source or ground which makes the current flow in one half of the winding. This generates polarity on the stator poles, and the rotor starts rotating accordingly. Reversing the polarity of the winding, the rotation is also changed. With this, the motor continues to turn 360 degrees.

No center tapping is used in this case, preferably the leads themselves are connected to the power supply or ground which generates stator polarity and continues to rotate the rotor 360 degrees in each cycle. Here the entire current flows in both the directions through the winding at a time.

Difference between Unipolar and Bipolar motors as per their Application

This article talks about the various characteristics of the two stepper motors and how they are different from each other. Hope it would have helped you to grow your knowledge about stepper motors.