SSD vs HDD – WHICH IS THE BETTER CHOICE FOR YOU?

Have you ever confused between SSD vs.HDD? Which is the best between SSD vs. HDD? When we are buying a laptop or a computer all of us goes through the same stage that which one is much better.

These are the questions which mainly arise when we buy laptops Should I be more dependable on SSD or HDD drive? Which one of them will perform well in my system and stays at the longer time So, let’s not worry we will discuss everything very briefly in this guide. We describe the major difference between SSD vs. HDD to figure out which one is best for you. Just come with us to get elaborated……

What is SSD ( Solid State Drive)?

SSD is a solid state drive which is also known as solid state disk. It’s a very newer technology by IBM engineers. It is invented in the 1970s. They were generally made for consumer devices. It is comparatively very expensive from other drives. Mainly two components make SSD one is the flash controller and the other one is Nand flash memory that maintains data when the power is lost. Read and write speed of SSD is 250mbps to 500mbps which is much better and more than HDD device. There is also no such type of data loss or drive corrupt problems. Many companies use SSD as a RAM for temporary use. When SSD is available it boots the performance of laptops and they function properly the speed is 100 times better than HDD. It stores all data in the small microchip.

How Does SSD works?

They stores data and files for the longest time. SSD use a type of memory which is known as “Flash memory” it is similar to RAM but operational functions are totally different. It clears the data when the system is power off. They are also called solid state disk because they have no moving parts. They are a type of electrical cells which send and receive data quickly. All these features make it must have accessories for the laptop. These frameworks which are separated into segments called “pages” and these are the pages where the data is stored properly. That pages are bundled together to form “blocks”. Thus it is all about how does SSD works. Now let’s have a look at their advantages and disadvantages.

It’s a time to replace your Hard drives and switch to more durable and easy to install drives. Let’s have a look at the advantages of SSD to get more detailed. 1. Easy to carry – Because they have very small physical size than hard disk drive you can easily carry your laptops and they are more friendly and stays longer 2. Easy to install- when you will install your own SSD it saves your time and money as well. 3. They are very durable – The traditional hard drives have a moving part in it so it does not take the longer time to resist but SSDs have the mini chip in it. Even when your laptops drop or the screen breaks but SSD will remain the same as before. 4. Improve performance- Not only it maintains the same level of reading and write performance but also have a good performance. 5. Energy consuming – It uses less power consumption. SSD does not need any power to drive motors. Over time it will also save your  energy bills 6. Dependabilities-It does not have moving parts. Handles more application in most difficult times

As we all know that coins have two sides we have discussed all the advantages and work of SSD drive now we will also tell you the disadvantages of SSD. The very first thing is it’s very expensive than HDDs. Because they are very latest technology that is why they are more expensive than the traditional HDD. It has finite numbers of writes. Unfortunately, with reset, each cell electrical resistance increases slightly that increases the voltage and it is necessary to write into that cell. In the end, the voltage which is required becomes high that the particular cell becomes impossible to write to. They also offer less storage than hard drives. Takes longer time to save data to the drive. HDD have unlimited write cycles than SSD. It also leads to data loss HDD stores up to 3TB data in a single drive. SSD have not that much capacity storage. It only stores data not more than 512GB. On the other hand, data recovery is so difficult that it takes a very long time. If the memory chip or controller has been damaged physically then you will lose your data completely. if you are ready to take this drive which is equally very important then you should also have to face its negative side.

What is HDD (Hard disk drive)?

HDD is a traditional storage device. It is also known as “hard disk drive” or”fixed drive” and we are using it for many years. They are introduced by IBM engineers in 1956. It is also called the gigabytes. When you install a program or you save a data its magnetic platters moves at a speed and stores everything in it when it is powered off. It is the combination of RAM and hard disk where hard drive stores your all data and RAM helps to run the program. It also controls the reading and writing of hard disk. Basically today laptop drives sin at either 5400 RPM (Revolutions per Minute) or 7200RPM, some server-based platters spin upto15,000 RPM.

How Does HDD works?

Now we have discussed “How does HDD works?” Let’s take a closer look! Every desktop has the hard drive in it which stores large capacity up to 10 TB. It is revolving head and each platter is round in the shape that carries digital information. It moves the platter at very high speed from 5400RPM -7200RPM. If the RPM drive will move faster you will get a better performance. It will not stores beyond the limitations It. This is relatively cheaper and easily available in markets easily. It now became the secondary storage device for general use of computers. It has also improved and maintained its position in the modern era for servers and personal computer. The drive is a type of Non-volatile storage.

Now, let’s have a closer look at notable Advantages of HDD.

We have already discussed that HDD have more capacity and it sores a large amount of data cheaply. And what is the importance of it We have talked more about the pros of Hard Disk Drive Now let’s move on to the disadvantages or drawbacks of the HDD? 1. Consume more energy : It consumes more power than a solid state drive. It needs more energy to operate its moving parts. That is why more manufacturers choose wireless or portable computers to promote energy efficiency and extend battery life. 2. Read-write speed is slower than SSD : One of the major disadvantages or cons of HDD, when we compare with solid state drive, is the speed. HDD speed is much slower than SSD. HDD has different read and writes speed. A computer with HDD is comparatively slower than that of SSD. 3. The distraction of sound : Noise is another drawback of a distraction of sound in a hard drive. While it is operating the metallic and other types of vibrates create more noise. 4. Larger form : It does not fit in one’s hand it is very large and much heavier than SSD when we compare both of then one is much lighter and too small and the other one is quite heavy and bigger in size and the physical form makes unsuited. 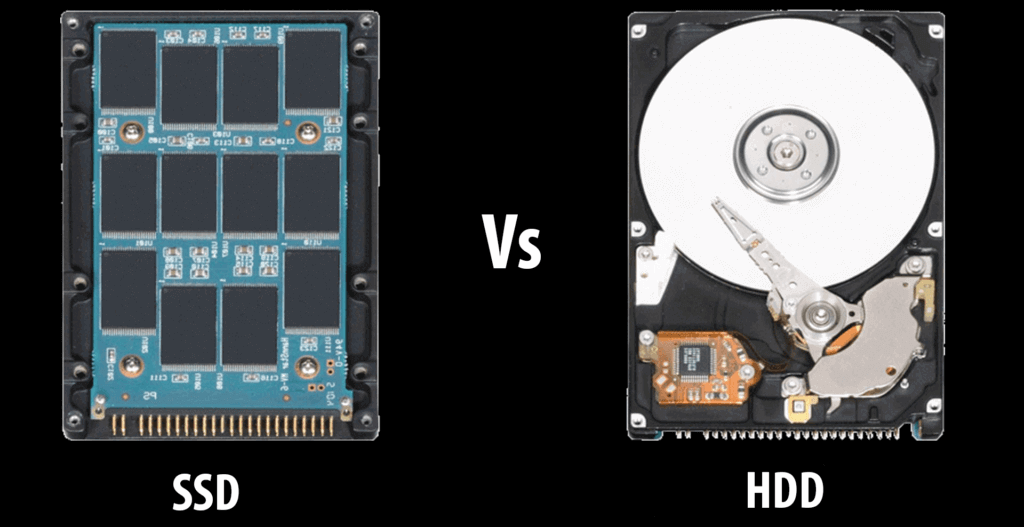 Therefore, we have discussed the difference between SSD vs. HDD. There are advantages and disadvantages to both, but what is going to be best for your build, and your budget? HDDs are affordable and you can receive more storage space. SSDs, are quicker, easier, more strong, and use limited energy. The final decision about which drive is best for you it comes down to your personal preference. If you like this guide, also share it with your Peers! And if you have any valuable feedback or query, feel free to tell us in comments. Follow us on Social Media